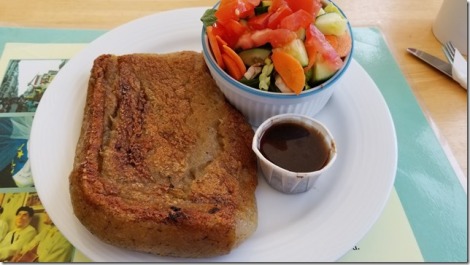 Halifax, Nova Scotia is known for lobster, lobster and more lobster. But you can get fresh lobster almost anywhere.  The unique, distinctive cuisine in Nova Scotia is Acadian cooking.

The Acadians are descendants of French colonists who settled in Canada’s maritime provinces in the 17th and 18th centuries. When Britain went to war with France in 1756 they were expelled by the British (some made their way to Louisiana and became known as “Cajuns”. ) After the hostilities ended some returned to New Brunswick, parts of Quebec, and Nova Scotia and today they maintain a vibrant, minority culture here, especially in the southern part of the province.

When researching the food ways here, the one Acadian dish I especially wanted to try was Rappie Pie. But the only restaurant I could find that serves this labor intensive dish, Cafe l’Acadie, made it only on Sunday and we were planning on heading south midweek. So I thought I would have to settle for Chicken Fricot or fishcakes. Happily, when I asked the owner about their rappie pie, he just happened to have a prized corner piece left over from the weekend so I had my rappie pie plus an impromptu lesson on how to make it.

What is rappie pie? Well it isn’t pie. Its basically a potato cake mixed with broth and baked for four hours. You start by making homemade chicken broth seasoned with summer savory, reserving the chicken meat when it is cooked. (or you can roast the chicken separately). Meanwhile you grate your potatoes, soak them in cold water to remove starch, and then put them in a towel and squeeze the crap out of them until all the water is removed. (Key point: reserve the water and measure it so you know how much was removed.) Then mix the potatoes with hot chicken stock, replacing 3/4’s of the volume of the water that was removed forming a thick paste. Then take an aluminum pan and put a layer of potato mixture on the bottom, then a layer of sliced chicken, then another layer of potatoes on top of the chicken. Then top the whole thing with a layer of salt pork strips. Put it in the oven at 425 degrees and bake for 4 hours.

The result is an intensely flavored cake, soft, creamy and fatty on the inside, with a deliciously crisp crust on the outside. Rustic and decadent.

They also know how to make a seafood chowder in these parts—just a touch of cream, not that heavy, gloupy stomach bomb that passes for chowder in most of the U.S.