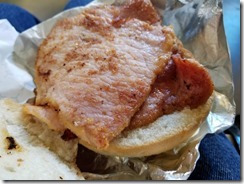 When traveling one of my pastimes is tracking down foods unique to the area in which I’m staying—foods that I’m unlikely to find anywhere else. Hawaii has its poi, Nebraska its runzas, the upper Midwest its pasties, and Wisconsin has booyah.

You’ve never heard of, let alone tasted, these local delicacies? In this age of global cuisine and instant communication, there is a reason why they haven’t escaped the confines of local food traditions—they’re not very good. You would find them appealing only if you grew up with them—the taste of home always tastes good. I realize I just made myself a boatload of enemies but truth be told these dishes weren’t worth the effort to track them down.

But nevertheless I persist. We were in Toronto last week, a great food town which I’ll post more on later. Toronto’s signature dish is the peameal bacon sandwich and so that was #1 on the list of dishes I had to have. The version at Carousel Bakery, housed inside a bustling downtown market, even had Anthony Bourdain’s imprimatur, and it appears in the book 1001 Foods You Must Eat Before You Die. I was sure this one would beat the odds and would be worth an Uber fare to track it down.

So what is peameal bacon? It’s unsmoked pork loin, cured in a brine of salt and sugar, trimmed of fat, and rolled in cornmeal to create a thin crust. Then it’s fried on the griddle, slapped on a soft bun and served with a variety of condiments. Carousel’s version had three generous slabs on each sandwich. It’s meaty and very tender but fans of what’s called bacon in the U.S. will find it bland. It lacks the crave-able smoky, fatty, salty, caramelized intensity of it’s cousin taken from the belly. It’s just very “porky”. The version at Carousel also had very little cornmeal on it. A crunchy crust would have vastly improved the sandwich. (Peameal bacon by the way is not Canadian bacon, which is smoked and not really Canadian at all. The name “peameal” comes from the ground yellow peas that were ground into a meal and used as a coating on the meat to preserve it in the 19th Century.)

So this goes on my list of regional foods that aren’t quite worthy of their hype although I must say it beats poi, runzas, pasties or booyah by a considerable distance. I might order it again but wouldn’t spend $25 on an Uber ride to find it.

One response to ““Meh” to Toronto’s Signature Dish: Peameal Bacon”