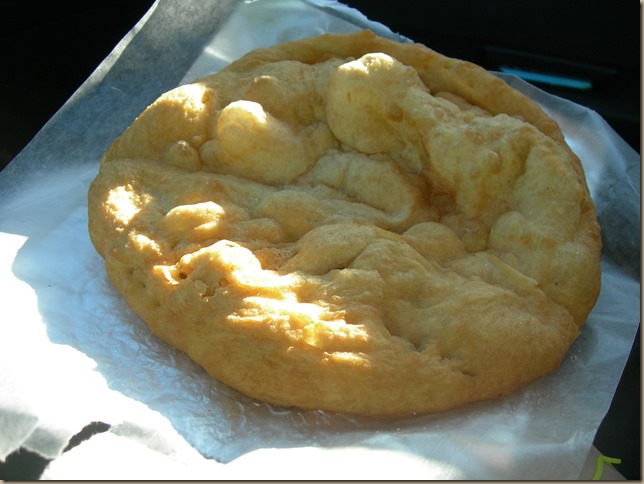 In a climate of extreme high temperatures, strong winds, and minimal rainfall  it’s a challenge to develop a rich cuisine. Only the hardiest plants survive leaving little for animals to eat, which limits their population as well—food for humans is scarce. Nevertheless, the early Pueblo Native Americans, inhabiting the deserts of the Southwest, developed a successful agriculture based on corn, squash, beans and chile peppers, helped along by ingenious water conservation strategies. The Navajo  who later came to dominate the region  preserved these agricultural techniques while acquiring sheep and cattle from the Spanish, further enhancing their diet. Thus, today, an interesting and diverse cuisine based on these historical influences survives in the tribal lands along the border of Arizona and Utah.

Yet, oddly, fry bread, the food most often identified with the Navajo, has little to do with this ancient, heroic struggle to eke a living out of the desert. When the Navajo were rounded up by Kit Carson’s gang and eventually forced to march 300 miles to New Mexico, relocated to land that would not support their agriculture, the government gave them white flour, sugar, baking powder, and lard. From those humble ingredients they made a bread that was largely responsible for their survival during their internment. Even today, fry bread is revered among most Navajo as the symbol of their struggle,  and is consumed at most ceremonies, although many lament its negative impact on health. Here is a typical recipe.

There are many versions of fry bread. In fact a fried bread appears in the cuisines of many cultures and the Navajo version is similar to sopapilla, the New Mexican sopping bread. ( Fry bread lacks the large air pocket in the center.) The basic recipe is simple—blend the flour with baking soda and salt, mix with water to form a dough, knead, then stretch the dough to form a large round and fry. But as with all baking, the details matter. How expertly one kneads and stretches will determine the quality. Some people add milk, sugar, or yeast but these would not be Navajo, who also insist the only proper flour to use is Bluebird.

The puzzle is why fry bread has not been assimilated into mainstream American cookery. Crisp and flaky on the outside, moist, tender, and slightly chewy inside, it is a perfect taco wrap for meats and stews and, on its own, has that addictive quality that a nation in love with fried carbs should crave; yet it remains a staple of only a few Arizona restaurants.

Fast food chains are missing the boat. I’m certain McFryBread is in our future.

Were can you find this delicious albeit guilty pleasure?

You might think the best fry bread would be found in the Navajo tribal region of Monument Valley on the border of Utah and Arizona. This is where Navajo culture flourishes in the shadows of the stunning sandstone sentinels that inspired both Navajo spirituality and John Ford Westerns. 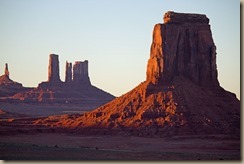 Monument Valley restaurants do serve a representative fry bread. The restaurant at Goulding’s Lodge serves theirs with a short menu of Native American dishes, although most of the menu is the  standard tourist fare of steak, burgers, and chicken. Their fry bread, unfortunately, is a bit doughy and lacks the flavor of the best versions. And their fillings and stews are less than ordinary—the green chile pork stew was thin and tasteless.

The View, a restaurant and hotel within the borders of the tribal park was much better, serving a decent fry bread as an appetizer or with traditional Navajo dishes such as red chile posole, green chile stew or mutton stew. The red posole was superb with tender chunks of pork and soft, billowy morsels of white hominy swimming in a rich, earthy chile broth that resonated with the red rock formations that filled the panorama outside. The green chile broth was light but flavorful seasoned with bright, fresh green chile paying understated compliments to the heaping mound of potatoes and chicken that filled the bowl–comfort food for a soul-stirring location. They serve a limited menu of standard tourist fare—but why would you eat that in a place like this.

But back to the fry bread. If you want fry bread, the good stuff, the kind of food that needs no view or table service or fancy hotel, the kind of food for which you will brave the elements,  street crime, and excess calories to gain a taste, then head 6 hours south to downtown Phoenix to the Fry Bread House. There you will find a fry bread (the size of a large plate) and accompaniments that are so good they might even make you consider a move to Phoenix—115 degrees in the shade while slaving over a hot vat of lard is not so bad.

What makes this fry bread so good?

It beats me. Its just crisper, more flaky, more tender, sweeter and served with a large menu of mouthwatering stews and other fillings–you could eat here for a month and still find something new. The red chili beef and the refried beans both had deep, earthy flavors that surpass the fare at most Mexican restaurants. Proprietor Cecelia Miller has been making fry bread at this location since 1992 and deservedly won a James Beard Foundation “American Classics” award in 2012.

So come on McDonalds. Open up your wallet and get that recipe. Let’s make this fry bread nation. After all, it’s the last bit of Native American culture left to steal.