The term “flyover country” when referring to the Midwest has always struck me as insulting. It not only ignores the Midwest’s great natural beauty but fails to acknowledge the cultural mix that enlivens these communities. In fact, when it comes to food and wine, there are experiences to be had in the Midwest that cannot be found elsewhere. The population of many Midwestern states is an amalgam of German, Scandinavian, and Irish ancestry among others, and they all had to marry their cuisines to the local ingredients creating unique food traditions that survive today. There is a reason why lefse, the Scandinavian flatbread, is popular in North Dakota and Minnesota, while beer and brats make Wisconsinites proud of their German heritage.

Truth be told some of these dishes are lovely only to the people who grew up with them; others deserve wider recognition. Nevertheless, they survive not as pillars of aesthetic beauty but as ceremonial icons richly evocative of the past, reinforcing attachments to one’s home but also as markers of distinctiveness, as a kind of resistance to the colonization of the global food culture.

This is apparently a closely guarded secret—I haven’t seen Lefse in the rest of the U.S. This potato-based flatbread is so good only an intentional strategy of silence would explain their lack of prominence. Lefse is of Norwegian origin and is made by ricing potatoes or using leftover mashed potatoes. Lefse looks like a flour tortilla but has  a more delicate, sweeter flavor and a lighter, thinner, more supple texture. They are typically served with melted butter dusted with sugar and cinnamon. Fargo North Dakota has its very own Lefse supplier where you can get a dozen for about $5. But don’t just buy one bag—they are addicting.

This is a thick soup of German origins made with chicken broth, potatoes and dumplings.  It has the flavor of the sauce in a chicken pot pie; the thickness of the sauce will vary according to personal taste. It is satisfying comfort food available at the iconic Kroll’s Diner in Bismarck. It’s rich and satisfying, worth seeking out on a cold winter night.

This is bound and seasoned ground beef wrapped in a deep fried, thinly layered, turnover crust. Served with gravy and mashed potatoes at Kroll’s in Bismarck, this is another dish of German origin worth seeking out if you’re hankering for fried food. With the thin, layered, crispy crust, It’s head and shoulders more tasty than the pasties found in Montana, Wisconsin and Michigan. 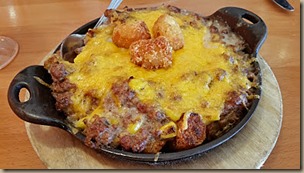 Minnesota and North Dakota loves them some hot dish. The basic idea is a one dish, inexpensive casserole containing meat, a starch, and a canned vegetable all held together with mushroom soup, perfect for reunions, church suppers, and potluck meals. Since the 1950’s, the hot dish has been covered with tater tots. Yes. You heard that right. That greasy, salty staple of the school lunch cafeteria is now a delicacy. In Minnesota they have competitions to decide the best amalgam of cheap meat, canned soup, overcooked vegetables, and tater tots. Go figure. In the U.S. we like to compete for “Top Tacky”. But truth be told, the hot dish is pretty good—you can’t go wrong with salt and fat. I tracked down an authentic version at The Mason Jar near Minneapolis.

One current trend is to update the hot dish. At Fargo’s The Boiler Room, the vegetable was caramelized onions, with lightly breaded sweet potato fingers in the shape of “tater tots” playing the role of starch, all bound together with sausage gravy, bacon and some quality cheddar cheese. I’m sure the traditionalists disapprove but this was a casserole I can get behind. It’s still a homogeneous mass of salt and fat but this one had lots of bright flavor with the sweet potato providing the anchor.

When you’re a thousand miles from an ocean, you don’t expect seafood to be a regional specialty, but Minnesota has lots of lakes which at one time were teeming with Walleye, a member of the Pike family and Minnesota’s state fish. It has become so popular and overfished that the state has outlawed commercial fishing of walleye although private anglers can still legally fish for it if they don’t sell it. Most of the restaurant walleye comes from Canada. At any rate, you can hardly find a restaurant serving American cuisine in Minnesota or North Dakota that does not serve walleye. It has a mild, slightly sweet flavor with some earth notes, lean and moist but will firm up when deep fried. It’s best served with sauces that are not too assertive. 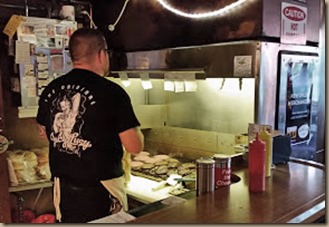 No discussion of Minnesota food should be without the contribution Minneapolis makes to burger lore. That would be the Jucy Lucy from Matt’s Bar and Grill. Back in 1954 one Matt Bristol had the brilliant idea of placing American cheese inside two burger patties, and sealing the edges–the Jucy Lucy was born. (the misspelling was a mistake carried forward intentionally) Matt’s bar is still there, a shabby little building in one of Minneapolis’s older neighborhoods. It was packed on a Thursday evening serving as many burgers as would fit on a tiny griddle at the end of the bar. It’s just burger meat but the melted cheese is piping hot and flows like lava when you bite into it. It’s an experience burger hounds should not miss.

I’ll have more to say about Minnesota grape wines in a future post. But in our brief stay near Fargo I couldn’t resist venturing into North Dakota’s wine country. We visited 4 Elements winery, a relatively new operation making wine from cold hardy grape varietals that will survive the frigid temperatures here. While we enjoyed their lineup of grape wines, especially an aromatic La Crescent, I was particularly enamored with their rhubarb wine, of which they make both a dry and sweet version. The aroma is flinty and slightly herbacious. On the palate its crisp with round rhubarb notes and citrus accents, with balanced acidity. Exotic fruit wines have left the root cellar at the farm and are being made by serious, professional winemakers. They can be quite delicious.