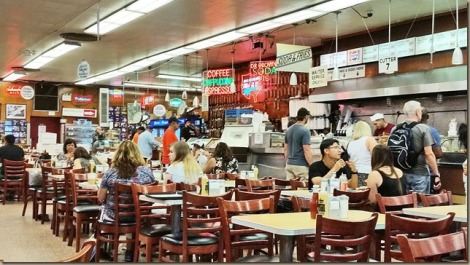 I had two days to eat in New York, one of the great food cities in the world where you can find virtually anything you want. That’s too many choices and too little time, a tyranny of choice. What to do?

When in doubt go with tradition. Four dishes that define New York (with apologies to all the great food I had to leave out). 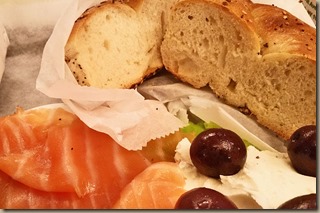 New York bagels are different and no it’s probably not the water that makes them unique. First of all they’re boiled before being baked. That distinguishes them from 90% of the bagels you find elsewhere which are steamed and thus don’t develop the proper crust. The decisive factor is probably the fact they’re boiled in a malt solution giving them a very mild malty flavor that you won’t find at Einstein’s. At good New York bagel shops they are also fresh out of the oven, still warm if your timing is good. At any rate a proper  New York bagel has a little crunch from the outer crust but is tender but chewy within. And for heaven’s sake don’t get them toasted—the New York food police will have you arrested for disparagement. And I can’t resist good belly lox to play the accompaniment. Esse E Bagel has been doing this since 1976.   They have it down. Just be prepared to stand in line for a half hour.

Pizza at John’s of Bleecker St. 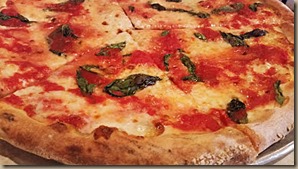 Today, you can get good pizza all over the country (except in Chicago where they think dough is a delicacy). But you probably won’t find pizza baked in a 1000 degree, coal-fired, brick oven served the old school way—a thick layer of very bright tomato sauce that tastes like tomatoes, spread with a single layer of bold, salty mozzarella and a generous handful of fresh basil. It’s basically a Neapolitan pizza but with high-gluten flour instead of 00, baked at a very high temperature delivering a crisp, thin crust, dotted with coal-fired char, that has more structure—it doesn’t sag in the middle. Yo, like New York backbone. They’ve been in business since 1929. It’s hard to find a better pizza if you’re looking for simple goodness. 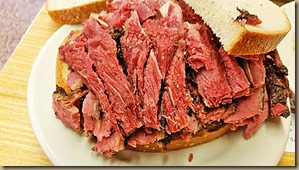 Generally acknowledged to be one of the world’s great sandwiches, their pastrami is made from brisket, salt-cured for 2-4 weeks, rubbed with a coriander-based spice mix and smoked for 2-3 days, boiled and then steamed until tender, hand sliced and propped between two slices of rye bread. it’s jiggly, textured with a firm, black bark, full of fatty, smoky flavor, and so tender it melts in your mouth.  They’ve been making pastrami this way since 1888. You’ve all seen this restaurant. The scene in the film “When Harry Met Sally” in which the punch line is “I’ll have what she’s having” was filmed here. The sandwich is indeed orgasm worthy.

New York soul is not all about the past. For some New York flair for innovation that nevertheless remains linked to tradition I decided on David Chang’s Momofuku Saam for his iconic, succulent steamed pork buns, a modern invention inspired by Chang’s love for Peking duck. 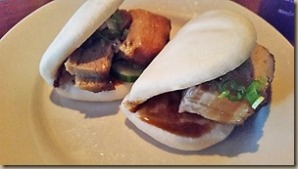 The dish is a pillowy, Chinese-style boa bun folded and stuffed with flavorful, slow roasted pork belly, dressed with a thin layer of hoisin sauce and topped with scallions and quick-cured cucumber. The cool crunch of the cucumber and the sweet hoisin sauce cut the fat and salt of the pork belly. It’s an inspired dish.

So we have the Poles, the Jews, the Italians, and the Chinese covered. To the hundreds of other ethnic groups who have contributed to New York’s glorious culinary culture, I’m looking forward to my next visit.