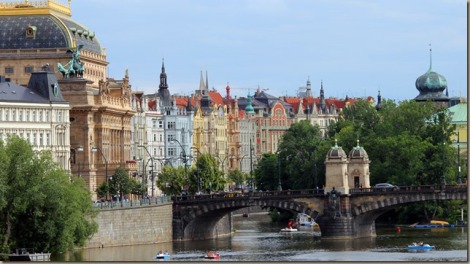 It is hard to capture in words the essence of Prague, the last stop on our European trip. In some ways it was not Prague we visited but a “Disneyland” of  Bohemia, a bustling, stunningly beautiful, mysterious, medieval European village surrounded by layers of modernity differentiated by the Austrian years, the communist years, and the contemporary Western European years—and swarming with tourists gazing at the wondrous architecture while swilling gallons of some of the best beer in the world.

What life in Prague is like for ordinary Czechs, well I’m really not sure. So compelling and engaging were Old Town and New Town that we seldom ventured out of “Disneyland” except to visit the contemporary art museum.

When in Prague you spend most of your time looking up.  The decorative building facades are amazing—every building is an individual, every street a medley of contrasting styles from several centuries that nevertheless seem to belong together.

Another thing you do a lot of in Prague is walk. The many historical centers of the city are adjacent to each other and the narrow cobblestone streets and public squares are unfriendly to vehicles–walking is really the only way to see them.

takes you to the massive castle complex dating from the 9th Century and now occupied by the  current President.

Below the castle is Mala Strana (litte quarter) featuring warrens of streets lined by Baroque-style buildings that deliver you to the foot of Petrin Hill overlooking the city. 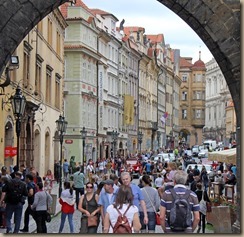 Return back across the river and you plunge into the Jewish sector where 6 ancient synagogues anchor this former ghetto that was mostly destroyed and rebuilt in the early 20th Century.

A few minutes walk then puts you in Old Town, a thousand-year-old village which for the most part escaped the destruction of WWII.  The labyrinthine  streets and alleyways lead to the beating heart of Prague, Old Town Square where the astronomical clock attracts hordes every hour on the hour.

This remarkable machine has been reliably showing the time and date for 600 years . It also shows the position of the sun, the phase of the moon, and dates of Christian celebrations. At the top of every hour, parading apostles and other moving statues appear and move about the edges as the massive bell rings to the delight of the crowds pouring into the square to witness the spectacle.

And then just a few short blocks South is Wenceslaus square, really a boulevard, traversing the length of New Town leading to the grand Czech National Museum at its end.

all served by an endless array of bars and restaurants.

Not to mention all the other strange things you encounter as you explore the children of ancient Bohemia. 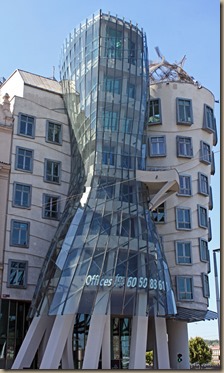 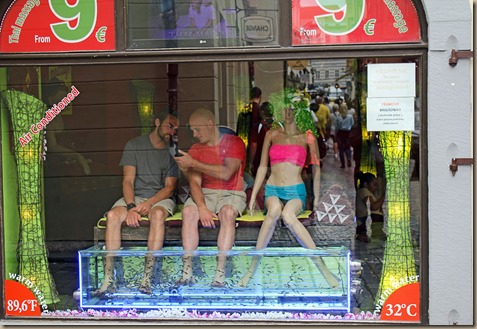 For us, of course, the real attraction of any place is food which is plentiful, cheap and good in Prague if you like meat, meat and more meat. (There are plenty of restaurants serving lighter fare, some vegetarian, but you have to seek them out)

at Mjelnice generally acknowledged to be one of the best

Traditional Czech food is, shall we say,  amply portioned and is perhaps best represented by it’s most famous dish—pig’s knuckle, a beast of a dish consisting of fall-off-the-massive-bone-tender pork, thick skin, with oceans of fat beneath, marinated in beer and herbs and roasted until the skin glows and yields a resistant crunch when you bite, accompanied by lots of horseradish, a few pickled vegetables and bread.

Several beers are required to get through it, but this unadulterated gluttony is a life-changing experience.

Another traditional dish worth seeking out is beef sirloin in cream sauce (Svíčková na smetaně). The sauce is made of root vegetables and is mixed with a little cream, topped with cranberry and served with bread dumplings. The sweet/tart flavors in the sauce are interesting despite the often ordinary cut of beef. The roast duck served with sauerkraut is always reliable. It’s common at traditional Czech restaurants  to serve these robust meat dishes with several large slices of steamed-bread dumplings that sit in the stomach like concrete. Only the largest appetites can make a dent.

Goulash is common but the several examples we had were boring. Sausage is ubiquitous with several kinds on offer although sometimes what they call sausage is what we call a hot dog. The best sausage we found was at the food stands in Wenceslaus square—snappy, greasy, and spicy, street food doesn’t get better.

But Prague eating is not only about history. The food revolution has come to Prague, for better and for worse, and the restaurant scene here is contemporary and international. You can find just about anything you want although, to be honest, we skipped the Mexican food, the sushi, and the American diner food. The exciting part of the food revolution is that many restaurants are taking traditional Czech dishes and updating them, lightening the dishes with more fresh vegetables and less starch such as this delicious rabbit confit at Nota Bene, a restaurant/brewery specializing in fresh, local ingredients.

This trend toward fresh and local that makes reference to food traditions achieves its consummate expression in one of Prague’s Michelin-starred restaurants, Le Degustation. Their tasting menu seamlessly melds traditional Czech flavors with modernist flair, such as this stunningly complex dish of onion, caramelized onion spheres, sorrel infused oil,  and intensely flavored lard cubes, paired with an unusual, gently-oaked local Riesling with intense acidity that perfectly balanced the sweet onions; 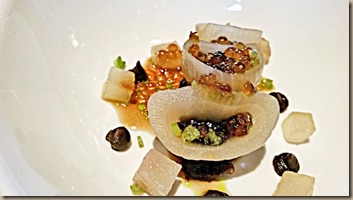 or a beef heart wrapped in thinly sliced Prague ham resting on a cucumber sauce and mustard seeds that freshened the whole dish.

This 11-course tasting menu was paired with a mix of Czech wines from Moravia and classical wines from Europe; the Czech wines stood up nicely to their better known French counterparts. Little known outside the Czech Republic, Moravia has a long 2,000 year history of making wine. Today there are about 700 wineries in the Czech Republic, 96% are in Moravia, about 2 1/2 hrs. Southeast of Prague. They grow many varietals including most notably Grüner Veltliner, Welschriesling, St. Laurent and some international varieties. But I was most impressed with their Frankovka, better known as Blaufränkisch. The several I tried were rich, earthy and elegant. Czech wines are exported to the rest of Europe but I seldom see them in the U.S. They are worth exploring.

Which brings me finally  to Czech beer. Pilsner-style beer originated in the 19th Century in Pilsen, a city about an hour West of Prague, so they know how to do this well. In 1842 town officials formed a brewery to brew beer in the Bavarian style using bottom fermenting yeast that produced a fresher beer. That brewery became known as Pilsner Urquell and today it can be found everywhere in Prague usually served fresh out of the tap which is the best way to drink it. Their basic Pilsner is spicy and floral, a bit heavier and with more malt presence than German Pilsner. Urquell makes several styles of Pilsner; I was most impressed with Hadlinka, a creamier style with great body.  Despite the ubiquity of a few large suppliers led by Urquell, microbreweries have a foothold and there are many strange and wonderful brews to be found like U Medvídků’s  X Beer 33, reputed to be the highest alcohol beer in the world and fermented for 6 months in oak barrels. It tastes of dark dried fruits, raisins and dates, thick and syrupy with some sherry notes and 11.8% alcohol, not a light summer sipper. This needs a dark, cold winter night to be enjoyed. And if you just can’t give it up you can find plenty of over-hopped IPA’s in the American style if you feel you must.

This city of dark magic, mystics, and cobblestone streets trodden throughout history by invading armies is nevertheless one of the best preserved cities in Eastern Europe, with comparatively little damage from WWII. And any place where you can get pig’s knuckle and several beers for $10 is worth visiting.