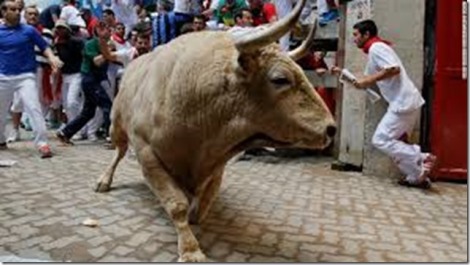 The running of the bulls in Pamplona is famous in part because of the association with danger and the mishaps that send careless joggers to the hospital or occasionally the morgue. Thus, these bulls have an undeserved reputation for being vicious. In fact, the bulls participating in the run are relatively docile creatures bred for their gentle temperament and used to herd the more aggressive fighting bulls into the arena. If the aggressive, hot-tempered fighting bulls participated in the run, the running of the bulls would be a yearly disaster. (Typically fewer than 10 people are injured each year by the bull’s horns)

These bulls are also highly prized for their meat. When they are retired from their career of herding and entertaining the hordes at Pamplona, they end up in the corrals of El Riscal Restaurant in Segovia where they are seriously pampered until ready for their final appearance on the plates of El Riscal’s patrons, among which we were counted on Monday.

Thinly sliced ovals of raw meat arrived at the table topped with a dollop of lard and sprinkled with fleur de sel,

along with a plate heated in 600 degree ovens on which each diner will cook their steer meat. 10 seconds on each side yields a succulent, juicy steak so tender it melts in your mouth.

But that was only lunch.

One of the principle wine/food pairing rules insists that what grows together goes together. The foods of a particular region go best with wine from that region. As with most rules, this one is riddled with exceptions but when the rule holds, it holds emphatically. The wines from Ribero del Duero are made from primarily Tempranillo grapes. But unlike the softer, more elegant expression of Tempranillo found in Rioja, Ribero del Duero’s wines are usually bold and tannic with a rustic edge that can be overwhelming if you’re not in the mood. Perhaps this is the result of high summer temperatures and a relatively short growing season but it may also be a stylistic choice dictated by the region’s food.

At El Llgar de San Vicente in the charming town of Peñafiel,  when first served a 2012 Crianza from Arzuaga Winery, I wondered why anyone would want to drink this everyday, it was so intense yet coarse and aggressive. 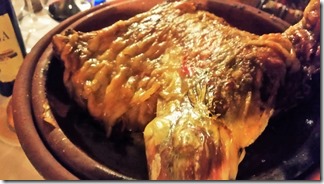 But when the roasted baby lamb arrived with its thick, crunchy skin, layer of fat and juicy meat hiding within cartilage and bone, it became clear why people in this region like their wines big—only a wine with bold fruit and tannins could tame this dish and give it some balance.

That was dinner. After a day like this, I’m ready to turn vegan.

But perhaps the most inspiring experience of the day was this vineyard of 102 year old Verdejo vines, some only about a foot tall—not only still producing fruit but producing fruit of great quality. 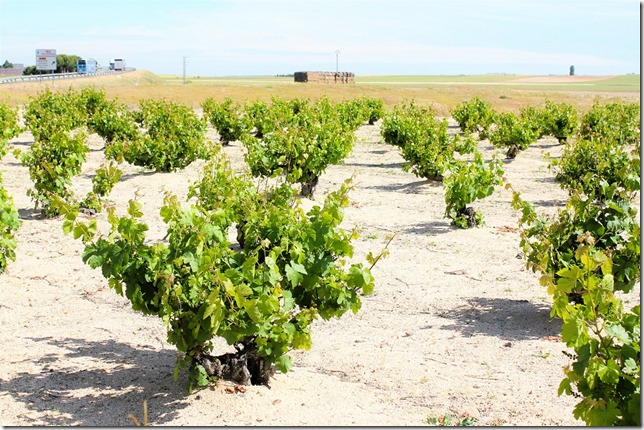 Owned by Shaya Winery in Spain’s Rueda region, grapes from these old vines make up the bulk of their higher end bottlings. In the U.S. we don’t see a lot of Verdejo. But it you’re looking for an alternative to Chardonnay, these wines will be a revelation. The judicious use of oak and lees stirring give them great texture while preserving the intensity of old-vine fruit. 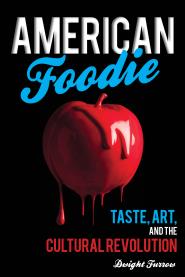